How to deal with the problem of flame cutting torch

In the traditional flame cutting method, the selected cutting fuel is mainly considered according to its cutting quality characteristics and cutting and using cost. According to the actual usage in the domestic market, the use of acetylene oxygen and propane oxygen in flame cutting fuel is the most common. A brief introduction to some characteristics of propane oxygen cutting is provided to help the CNC flame cutting machine operators understand this knowledge.
Propane is a by-product of the petrochemical industry. It has abundant sources, low prices, and combustion-free environment. It is a viable alternative to acetylene. As the propane flame temperature is lower, the preheating time is relatively longer than that of acetylene, which is a great difficulty encountered in the current promotion and application. Due to the fact that the propane flame has a low dispersion of heat, a lower temperature, and less possibility of metal melting caused by the flame, the edge of the cut edge is less prone to cause collapse, the cut is smooth and smooth, and there is less slag along the cut edge and is easily removed.
Propylene as a branch of propane, its flame core and outer flame have a higher heat release, flame heat distribution and acetylene similar to the outer flame heat than acetylene. Therefore, propylene has both the properties of the acetylene flame and the high heat content of the propane flame. The flame temperature is lower than that of the acetylene flame, but it is higher than the propane flame temperature and is a good gas for cutting. The cutting characteristics of the propylene flame are: the flame temperature is higher, the cutting preheating time is about to increase compared with acetylene, but faster than propane, due to the high thermal content of the outer flame, it is beneficial to the cutting of thick components.
After the traditional flame cutting was integrated with the CNC automation operating system, its operation was simplified to a considerable extent, but some experiences summarized for flame cutting for many years are still applicable to daily processing, especially for the common failures of flame cutting torches. This is particularly true for the treatment. The following Kunshan City, Li Neng Automation Equipment Co., Ltd. will introduce some of their own experience on the flame cutting torch troubleshooting issues, hoping to provide reference for everyone.
1, when there is a "bump, hammer" sound (fire) and continuous fire extinguishing phenomenon. Because the torch is used for too long, impurities in the acetylene, especially calcium hydroxide and other soot are attached to the inner wall of the ejector tube. When excluding it, scrape off the soot with a fine wire that is smaller than the diameter of the injection nozzle, especially at the end of the injection pipe hole, which should be cleared.
2, the shooting ability is small, the flame is small. Oxygen valve needle is thicker or due to the oxygen valve needle bending and injection pipe hole and oxygen regulator valve hole caused by different axes, should remove dust and straighten the valve needle.
3, there is no shooting capacity, but also the phenomenon of countercurrent. Due to impurities in the ejector hole or plugging of the tip. If the tip is not plugged, remove the acetylene rubber hose, block the tip with your fingers and turn on the oxygen regulator to reverse the flow of oxygen and blow the impurities out of the acetylene tubing connector. If necessary, the gas mixture can be removed to remove internal impurities. If the tip is clogged, the splatter can be removed with a pin and an emery cloth.
4, After the fire started, the flame suddenly changed suddenly. Due to the thread wear of the oxygen valve needle bar and the excessive clearance, the valve pin and the pin hole are caused by different axes, and the oxygen valve pin must be replaced.
5. The acetylene junction is reversed. The nozzle is mainly loose with the oxygen valve needle and should be tightened.
6. During the welding of large weldments or preheated weldments, there are continuous fire extinguishing phenomena. The reason is that the temperature of the tip and the mixed gas pipe is too high or the tip of the nozzle is loose. At this time, the acetylene should be shut down, the tip of the welding torch should be immersed in water to cool or tighten the welding tip, or the asbestos rope should be wetted with water, and then the welding tip and the mixing gas pipe should be wrapped and wrapped.

Measuring Wheel is also known as measure wheel.There are two types, mechanical and digital display measuring wheel. It is designed for outdoor distance measurement. It can be for a variety of ground conditions, including hills, meadows, and rugged construction sites and so on. 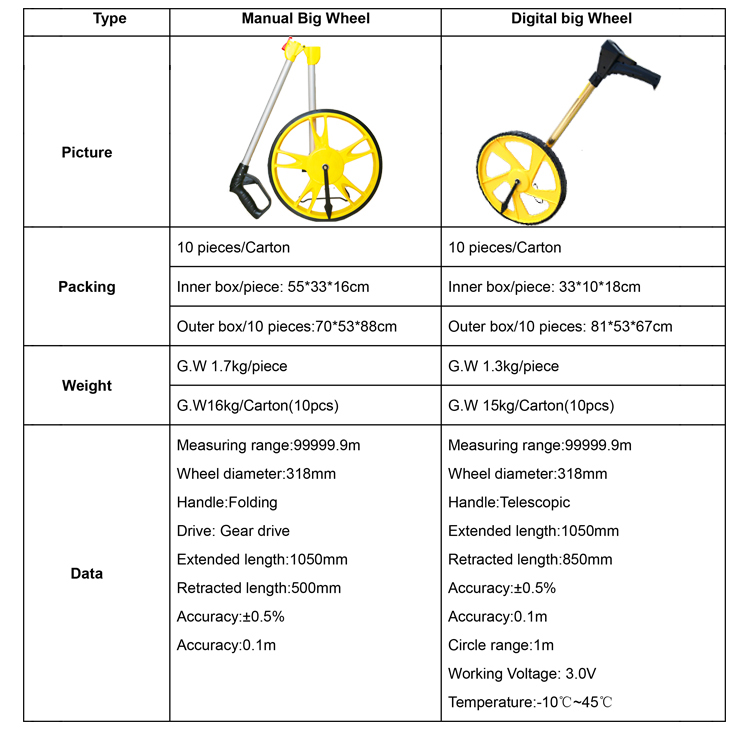